This horn is identical to the never-sold SML “Lucerne” stencil I did a while back, and is basically a SML Gold Medal without all the bells and whistles like locking neck ring, rolled toneholes, adjustment screws, and adjustable bumper felts on the keyguards.

This was a major overhaul, including manufacturing a replacement neck tenon and tenon receiver and doing some brazing on the neck and body tube where the seams had separated.  This was in addition to a lot of dents and corrosion and soldering and poorly done past dentwork and then of course a full mechanical rebuild of the keywork.

Although it might not be as pretty as the example I did a little while ago, it played every bit as good.  SMLs are like the French Conn- huge sound, full and round and lush and dark and ballsy.  They are built extremely well and even when one has had a full life like this one, they hold up very well and come out playing great.

The remaking of the tenon and tenon receiver were a bit challenging because I wanted to beef it up a little bit, and the dimensions are obviously extremely important in this area.  I kept the internal dimensions exactly the same as the originals (well not exactly the same as they had been nearly destroyed in what appeared to be a major drop/pulldown at some point in the distant past) but added thickness to the tenon and the receiver.  Since there is a post for the octave mechanism  on the receiver, I had to make up for adding a few hundredths in thickness by removing a few hundredths off the bottom of the post, so that the rod going through the post to the body posts would stay aligned.  I am very pleased with how it turned out, looking just like the original with the same internal dimensions while being substantially stronger and less likely to bow out and crack like the old receiver did.  I did this on my little Taig lathe which recently replaced my larger Maximat, and I was very impressed by the tiny machine’s durability and precision.

The one part of this build that I was not happy with was that I burned way more lacquer than I should have while brazing around the low Eb tonehole, which is now visible as an area of bare brass after I cleaned away the burnt remnants.  I’m not sure if the major corrosion in the area had anything to do with it (the burned area matches exactly where there was a lot of green corrosion building up between the flaking lacquer and the body), but I have to assume I could have done it better.  SML lacquer is known for being especially heat-sensitive, and although I took the precautions I knew how to take, the lacquer flared up and turned brown in a large area in a flash before I could remove the heat, and I am extremely disappointed in myself.  I am actually having a pretty hard time writing about it, but “On The Bench” isn’t just to talk about the pretty parts of the jobs.  Next time I’ll do better, but that doesn’t exactly make up for it.

Other than that, I am happy with how this challenging overhaul turned out, and I am glad to know that this horn has been given a new lease on life because it surely deserves it. 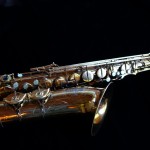 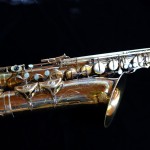 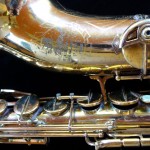 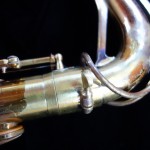 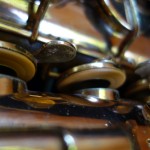 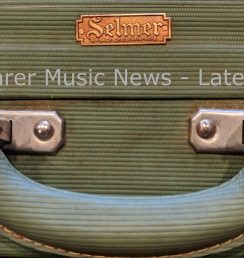 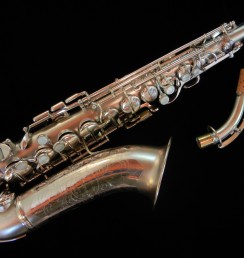 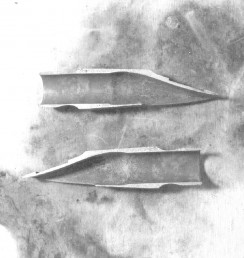 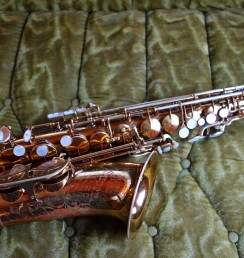